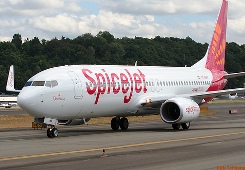 Budget carrier SpiceJet, which on Friday announced the launch of Pune-Sharjah flight from Saturday, said it is in talks with Air Arabia for an ‘interline arrangement’.

In aviation parlance, an ‘interline arrangement’ is a deal under which the same ticket covers different legs of the journey flown by different airlines.

"We are talking to Air Arabia for an interline arrangement (mutual transfer of passengers).

“The talks, however, are at a very preliminary stage," SpiceJet Commercial Head V Raja told reporters in Pune.

Raja said once SpiceJet and Air Arabia arrive at an understanding, passengers of the two carriers will have a seamless journey to and from India.

Earlier, sources had said media baron Kalanithi Maran- promoted Indian carrier was in talks with Tiger Air of Singapore for a codeshare partnership.

Stating that SpiceJet is the only domestic carrier to launch direct connectivity to Sharjah from Pune, Raja said the airline will soon announce a direct flight to Bangkok from the city as well.

While the Pune-Sharjah flights begins on Saturday, Raja said, "the announcement about the Pune-Bangkok flight may come as early as in the next one week." The Gurgaon-based airline will deploy new generation Boeing 737-800 aircraft and has announced introductory fare of just Rs 12,000 for a two-way journey.

The airline is offering an introductory fare of just Rs 7,999 one way on the Bangalore-Bangkok route.

With these additions, SpiceJet will be connecting 10 international destinations daily with 350 domestic flights from 45 cities.